You are here:
KNOW YOUR MEDICATIONS 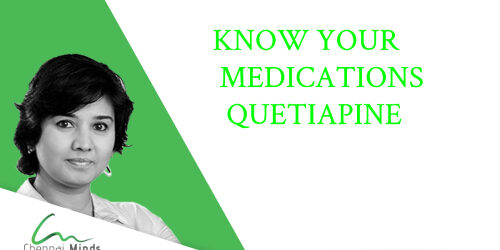 You may be looking into this blog as you have been prescribed quetiapine and to learn more about this medication and to see what it’s characteristics are like.

Your psychiatrist may commonly prescribe quetiapine for schizophrenia, mania in bi polar disorder or depression which may be resistant to antidepressants alone.

In fact, Quetiapine is a very versatile medication and is used in Generalized Anxiety Disorder, insomnia (sleeplessness), Post traumatic stress disorder, sometimes it is the preferred antipsychotic when one has Parkinson’s disease.

Additionally, quetiapine is also  antagonist at Alpha 1 receptors which may account to orthostatic hypotension and also Histamine H 1 blockade leading to sedation and weight gain.

Extended-release tablets may be slower to take action but it gives a steady and prolonged effect and ease of taking once a day.

Your psychiatrist may start you with a low lose of 25 or 50 mg. This will be increased in stages and maintained depending on your condition up to 750 mg per day which is the maximum dose.

Extended-release tablets are available at 300 mg and 600 mg and helps to keep a steady action of the medication.

Just like any other medications quetiapine also has side effects and prescribed only if it’s benefit is clearly more than the risks.

Commonly it can cause excessive sleepiness, appetite causing weight gain and changes to blood pressure. Sometimes tremors can happen which is also a side effect.

Since Quetiapine is processed (metabolized) in the liver your doctor will take precautions if you have had a liver impairment (hepatic impairment). There is also caution in renal impairment. This is also a reason why your psychiatrist would request your blood test results. Similarly, caution is taken when there is cardiovascular disease too. Which is the reason your psychiatrist may request an ECG.

The aim of Chennai minds through these blogs is to help you understand medications prescribed and take them with confidence. We offer online counselling for depression as part of our telepsychiatry services that aims to treat depression with a combination of medications and Cognitive Behaviour Therapy.

I Am Pregnant. Can I Continue My Antidepressants?
February 21, 2022

Why am I asked to do an ECG and what should I know about QT interval?
November 15, 2021

Modafinil – All you need to know
October 21, 2021
Enquiry Form
Subscribe for Email Notification